The Provincial Commissioner of Police in Limpopo Lieutenant General Thembi Hadebe has hailed the total commitment and unwavering support displayed by ordinary community members and other organised community structures on Saturday 24 July 2021, in assisting the police to rearrest three of the four dangerous criminals who escaped from a Police motor vehicle on Wednesday 21 July 2021.

Two truck hijackings that took place along the N1 road on two consecutive days, one on Thursday night, 22 July 2021, next to the area where these convicted criminals escaped and the other on Friday 23 July 2021 at Nyl Plaza, led to the dramatic rearrest of the escapees.

Four suspects fitting the description of the ones who earlier escaped from the police van along the R101 road south of Polokwane, allegedly hijacked a truck and later abandoned it at Ysyerberg on the N1 road.

The same suspects allegedly hijacked another truck the next day at Nyl Plaza toll gate and drove it towards Modimolle, with the victims inside. The truck hit one of the barricades at Kranskop tollgate and the suspects jumped off and fled into the bushes.

One of the escapees allegedly shot at the police when he was spotted. The Police returned fire and when searching the area, the suspect was found on top of a tree and injured. He was immediately arrested. The other two suspects were arrested in the vicinity.

A search operation continued and a police firearm that was robbed during the escape was recovered in the bushes.

The following escapees were rearrested:

Dennis Hove, pictured below 👇 is still at large and the search continues.

The four suspects are also facing several cases of armed robberies and possession of illegal firearms that were allegedly committed along the N1 road under Belabela, Modimolle, Mookgopong and Mokopane policing areas, targeting motorists.

The suspects were to be sentenced in Mokopane Regional Court on Friday 23 July 2021 when they escaped from a police vehicle whilst being transported from Polokwane Correctional Centre.

“We commend all role players who participated in this operation that led to the apprehension of these criminals and also thank community members for their continued support,” concluded Lieutenant General Hadebe. 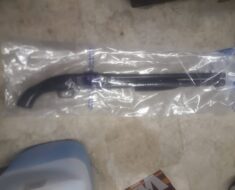 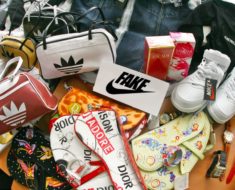 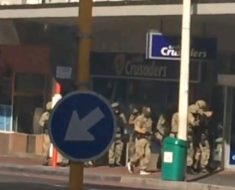 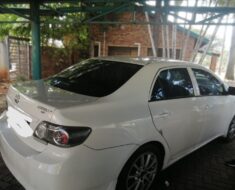 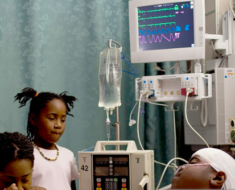