This is my story and I decided to share it to all the genuine fans of relationships and dating. 3years ago, I recalled when I was working in a manufacturing firm; I was completely new in the company.  I was posted to accounting section on the company because that was my main course. It was a tasking job and required all the full concentration I can actually give to it. Few weeks of my resumption, I noticed all the male folks where nice to me; I thought it was just normal thing, not until the chief accountant of the company started pestering for sex.

I knew he was married, I tried to talk him out of it, but he was just too blunt about what he wanted. And I needed the job so badly because I was going through a lot of financial difficulty at that time. I later told him to give me some time to think about it, I was completely confused. In the period of thing about it, managing director son came to the office and we met, and he made enquiries from me, I told him I was working in the company. He later came by my space and started his own talk. He even threatens to relief me of my duties if I don’t spend the night with him. He said that it is only normal and it is what other ladies do in the company to retain their job. I was fed up. That same day, when I got home my landlord told me that he has just sold the building where I live and the new owner wants to carry out renovation works on the structure. They want me to move out of the building as soon as possible. I felt my world was coming to an end.  3weeks after this, I got a sack letter for no just reasons, they just said they are downsizing and they feel I am the only one that should go. I cried, I cried to the point that I was knocked down by an unseen vehicle. Only for me to open my eyes on bed, I discovered that I had been unconscious for days. The man that knocked me off the road later came by to check up on me and we got talking. I told him what was making me to cry that very day, he asked for my resume when I was discharged. Few days later, I was called to resume duty, it sounded like a dream to me, because when I saw the employment offer and what was written in it, I was dazed. What on earth will I be doing with so much money? I asked myself. I want to specially thank God I never gave in to their sexual demand in the former place where I work. Today, I live in a beautiful duplex and I am about to get married to the love of my life. Thank God

Prayer: In the name of Jesus, I decree that your time for elevation and prosperity is now in the mighty name of Jesus.  Take a sec. of your time Type Amen to claim this prayer if you believe in GOD. Ignore if u think God can’t do it for you. Please SHARE so your friends can also read this 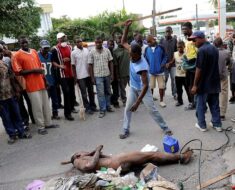