Coming up on Isidingo this March 2015: Monday 2 March 2015 Episode 4108 Barker struggles with whether or not to risk all and give the interview as planned. Charlie has to turn to Priya for help when faced with Ben’s anger at her allegations. Sechaba makes a last ditch attempt to reconcile with Lerato. Tuesday 3 March 2015 Episode 4109 Brad is worried by Palesa’s reaction to the attack on them and decides to take matters into his own hands. Priya tells Charlie that her warning to Ben will make life easier for her, but Ben has other plans. Lerato’s room is flooded and she has to find somewhere else to stay. Wednesday 4 March 2015 Episode 4110 Barker and Nikiwe compete for possession of Bradley’s allegiance. Ben launches an attack on his most vocal critic. Lerato, flooded out of house and home, struggles to find a place to stay. Thursday 5 March 2015 Episode 4111 Bradley shocks the corporate world, signalling a tectonic power shift. Priya discovers just how dangerous and devious the enemy can be. Lerato is disappointed by arrangements for her accommodation. Friday 6 March 2015 Episode 4112 Palesa gets an ultimatum and an indirect but ominous warning. Charlie finds herself trapped in a war zone. Lerato finally finds what she’s looking for. Monday 9 March 2015 Episode 4113 Palesa gets an unwelcome gift that spurs Brad into action. Priya receives support from an unexpected source. Lerato plays strategic games with Sechaba. Tuesday 10 March 2015 Episode 4114 Brad wants to stand up to the Sibekos, but does Palesa have the guts to stand with him? Ben is closing in on Priya – has she pushed him too far? Lerato starts taking liberties in Sechaba’s house, but will he put up with it? Wednesday 11 March 2015 Episode 4115 When Barker refuses to assist Brad in his investigation into Lincoln, Brad decides to go it alone. Priya is nervous when she’s called into a meeting with her boss. Sechaba’s easy bachelor existence is threatened when Lerato starts making herself at home. Thursday 12 March 2015 Episode 4116 Bradley is a fish out of water in his attempts to expose the culprits behind the failed hit on his life. Priya is shocked by the position Eddie takes after his meeting with Colonel Nene. Lerato and Sechaba get on each other’s nerves living under the same roof. Friday 13 March 2015 Episode 4117 Sizwe is caught between fear and moral obligation. Benjamin continues to plant evil seeds of doubt in the community. Sechaba refuses to share the pizza. Monday 16 March 2015 Episode 4118 Sizwe’s anger against the injustice of the world comes to the boil. Ben zones in on Priya in his campaign to have her dismissed from her post. Lerato’s smug after pulling a fast one on Sechaba. Tuesday 17 March 2015 Episode 4119 Brad finds his investigation has many negatives to it. Eddie makes a major decision with regards to his future. Sechaba and Lerato battle over food – but is it really about the food? Wednesday 18 March 2015 Episode 4120 In the wake of his co-worker’s injury, Sizwe wants justice from the Sibekos. Eddie wants to warn Priya what’s coming towards her, but is he too late? Lerato rejects Sechaba’s attempt to apologize, but ends up shooting herself in the foot. Thursday 19 March 2015 Episode 4121 Brad has to decide whether to use Sizwe in his campaign against Lincoln. Priya and Eddie’s friendship erodes even further as Priya’s career troubles mount. Things settle down in the Matabane house, until Lerato detects Sechaba’s growing jealousy. Friday 20 March 2015 Episode 4122 Warning bells are sounded when the miners’ safety issues affect key players. Eddie is at a major crossroads in his career but will he be able to betray Priya for his own gain? Sechaba over-shares to Lerato with disastrous results. Monday 23 March 2015 Episode 4123 A miner suffers in hospital and the tide of anger rises among the workers. Priya steels herself for battle, but more bad news is on the way. Sechaba learns lessons about honesty and relationships. Tuesday 24 March 2015 Episode 4124 Bradley, intent on saving the mine from a potentially dangerous strike, runs into opposition. Eddie finds himself faced with a dilemma: on the one side the claims of friendship, on the other the temptations of promotion. Lerato teases Sechaba to provoke his jealousy. Wednesday 25 March 2015 Episode 4125 Brad regrets his mistakes with Sizwe and fears that he and Nikiwe are losing control of the situation. Eddie surprises Yvette with a sudden about turn. Lerato baits Sechaba unmercifully. Thursday 26 March 2015 Episode 4126 Sizwe is torn between Nikiwe’s offer and his anger and sorrow about Thembile’s death. Priya tries to cope with the prospect of her disciplinary hearing, but the road ahead is full of unseen obstacles. Sechaba burns with jealousy as Lerato heads off on her date. Friday 27 March 2015 Episode 4127 Sizwe is squeezed in a vice of capitalism and politics. Rajesh tries to help Priya but only increases his own jeopardy. Lerato’s plumbing difficulties lead to discussion in the commune. Monday 30 March 2015 Episode 4128 Katlego enlists an innocent into her game to win the hearts and minds of the workers. Priya takes strain as her friend and ally, Eddie, has turned against her. Lerato finds a new place to live but is tentative about how it will work. Tuesday 31 March 2015 Episode 4129 After a dark night of the soul, Sizwe finally commits himself to action. It looks very much as if Eddie’s committed to betraying his old friend and colleague, Priya. A prissy Lerato clashes head on with her new house mates. Isidingo is on SABC3 Mondays to Fridays at 19h00. 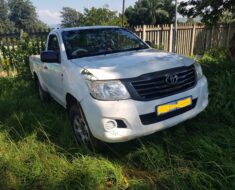